This past weekend, I had the joy and pleasure of spending a day and a half with like-minded school garden educators at the Soil Born Farms school garden symposium in Sacramento. Initiated in 2015 to celebrate the 20-year anniversary of Delaine Eastin’s 1995 decree to have “A Garden in Every School” in California, this event brings speakers and workshops to garden educators for a very reasonable price.

Overall, it was a well-organized event with knowledgeable attendees and a wide range of offerings. One workshop, however, confronted some of my long-held beliefs about garden norms and practices related to bugs. In this workshop, the presenter modeled how to set the stage for entering the garden by reviewing a few “ground rules.” One rule was about how to handle bugs. He suggested that kids only look, but not touch bugs because, “How would you feel if you were as small as a roly poly and a giant finger started poking you?”

Roly polies (pill bugs) are small gray isopods with a very cool habit of rolling into a small ball when approached, which is a great example of a behavioral adaptation. Because of their “armored” protective layer, they are not easily harmed by gentle handling, even by small children with not-so-nimble fingers.

Roly polies (and sow bugs) are actually an order of crustaceans (related to shrimp, crabs and lobster). They have a very long evolutionary history and can be found in great numbers, which is another reason why I think it’s acceptable to gently handle them in the garden. A characteristic these isopods share with their marine cousins is a segmented exoskeleton.  Ladybugs –all beetles, actually– have a similar protective layer on their bodies. But they are classified as insects, not isopods.

How do scientists sort organisms into groups?

They observe them up close! And they most definitely touch, most often usually when the bugs are no longer alive. I’m not suggesting that children ruthlessly manipulate bugs in the garden to identify them accurately, but I do support encouraging the mindset of a scientist by asking questions, making focused observations, creating detailed sketches, and sharing their learning with others. 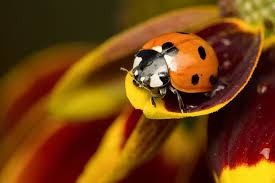 A ladybug has a rounder abdomen that is bright orange or red. They feed on pests such as aphids and whiteflies.

Cucumber beetles have a longer abdomen that is yellow-green in color with spots or stripes. They chew holes in cucurbits (squash, melons, pumpkins and, as its name implies, cucumbers).

Without these scientific habits of mind, garden educators are much more likely to just tell kids what they see, rather than guiding their ability to think and seek answers for themselves. Asking questions leads to further investigation and exploration in the garden.

Aren’t asking questions and investigating two enticing reasons to have a garden in every school?

Another important outcome of garden-based learning is respect for the natural environment, so of course it is crucial to set “ground rules” for exploring bugs. I prefer to adopt and adapt more flexible practices, co-create norms with kids, and differentiate between types bugs that can be touched and under what conditions:

Hopefully these guidelines can help you find middle ground when curious kids want to touch every bug they see.

This site uses Akismet to reduce spam. Learn how your comment data is processed.

All About Yoga Practice, Poses, and Benefits

YA suspense author of The Half Theft duology